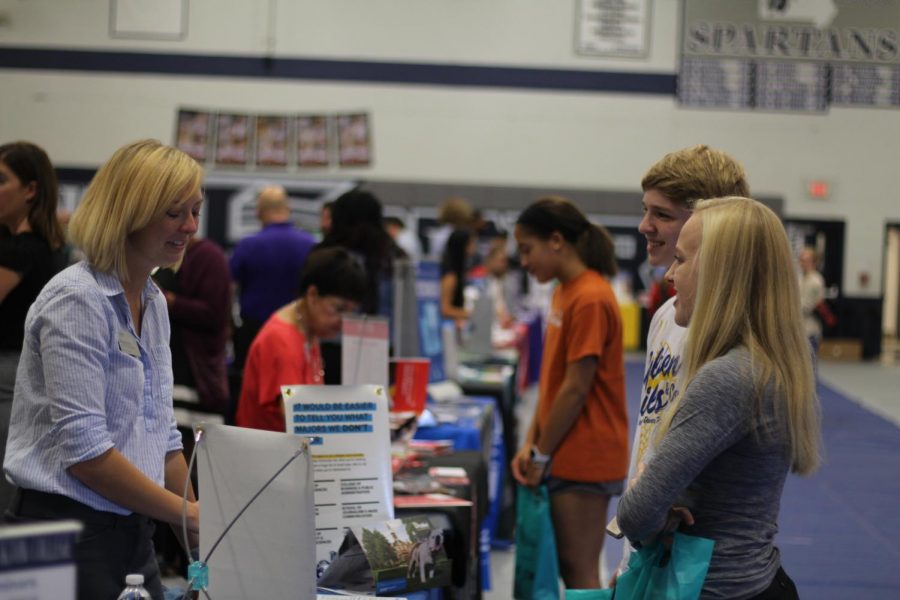 Excited to head off to college, Junior Jade Reischl talks with Drake University's college ambassador about the perks of attending their school, and becoming a bulldog.

“I really didn’t know what to expect. I knew there were going to be a lot of colleges, but I didn’t know where the colleges I wanted to see were at,” junior Sean Reardon said. “I think a lot of people had an idea of who they wanted to see, and I found it very beneficial for the students.”

The event gave students opportunities to meet different representatives and learn how things would work if they were to go to that specific school.

“I saw a lot of people asking where certain colleges were because they wanted to go see them,” Reardon said. “I think the college fair went great and should become a yearly event for the district.”

“Being completely honest, I feel like the majority of kids were there because they had to be, but I know many still wanted to get information on schools. So I believe even though they didn’t want to be there, everyone still learned something,” junior Cory Rivoli said. “I feel like the college fair did go well. Many of my friends and people around me talked to multiple colleges and grabbed brochures. This should definitely come back next year because it really does help people who may or may not know how to get information about colleges.”

“The colleges that stood out to me would have to be Mizzou and Missouri State.” Rivoli said. “Mostly because they both offer classes for the skills I would like to learn.”

“Mizzou stood out just because of all of the people and because it is a great school,” Reardon said.

For this being the first college fair, suggestions for the future came to mind.

“Something I might change about the college fair would possibly be adding more time so everyone has a chance to talk to all the colleges they want,” Rivoli said.

“I think the students should have more time one-on-one with their counselor just to maybe explore a career path and possible colleges they could visit just to have a better game plan,” Reardon said.