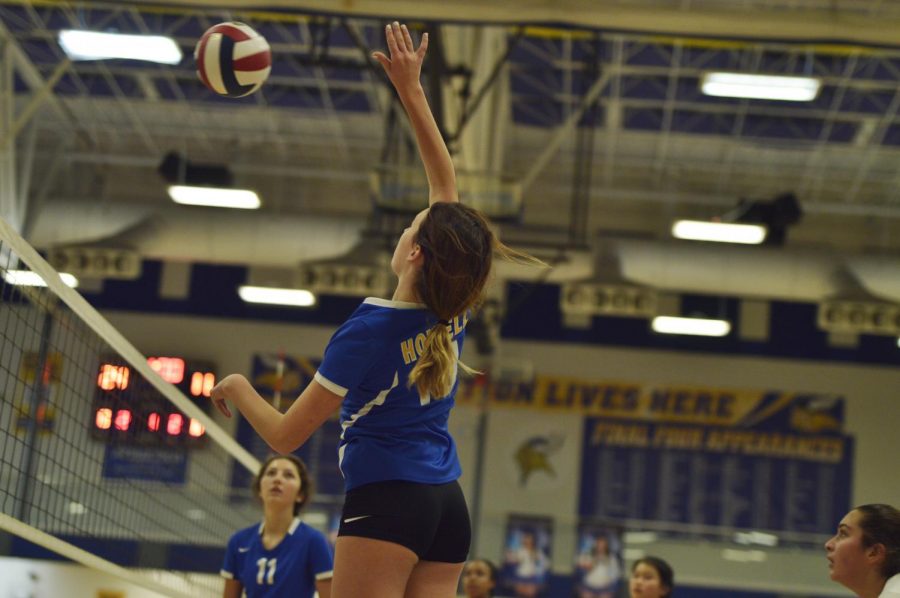 “I think it’s just fun and I’ve been playing for so long that it’s just become a part of my life, you know, it wasn’t just me. It was Kennedy and Isabelle playing. So really no matter where I was, volleyball was kind of around. So just a little comfort.” Cordia said.

Cordia’s plans for staying with JV depend upon her schooling.

“I’m going to be doing a grad program next fall. And so I’m going to talk to Danielle to see if I can stay on as the JV coach, but there is a chance I may not be able to just for the conflicts. But I will come when I can and help for the practices,” Cordia said.

Coach Danielle Rygelski is a close friend, and they played together for 15 years. The varsity coach, Rygelski offered Cordia a position as JV coach,

“Rygleski was looking for assistant coaches, and she just asked me, and I hadn’t really thought about it beforehand. But I was like, that’d be kind of fun to go back to my high school with one of my best friends who I played in high school with,” Cordia said.

Coaching wasn’t easy in the beginning.

“You have to be aware of every aspect of the game and not just your own. For example I was a setter, I was never really concerned with how the outsides or middles were heading or how the passers were passing, so I was more concerned with my skill and what I brought to the team. Now as a coach, I kind of have to look at every individual position and pinpoint what they’re doing,” Cordia said.

The JV team adapted to having a new coach.

“I was excited when I found out there was going to be a new coach. I really like her. She brings a lot to the table in terms of teaching and refining skills. She’s super sweet. She  brings a lot of positive vibes to the team and makes us more positive, it really gets us out of ruts for points. She’s like an older sister, but she’s not just nice, she helps us get better, but not in a strict way like some coaches,” sophomore Elizabeth Tucker said.

The JV team knows it has work to do.

“We should work on improving as a team, and being supportive,- and if we communicate more on the court it would help us a lot,” sophomore Hannah Cooper said.

Cordia is very excited with how the season will play out.

“I’d say we’re doing pretty well. We’ve only lost two matches. And that was in our tournament,” Cordia said.

As the team continues to advance Cordia still thinks they can improve.

“Other than that we’re undefeated in our normal season play, so I’m pretty pleased. Though I would like to see the team be able to put any individual on the court and know we are going to be able to beat the team. So that way I can put any six people out there and I know that they’ll kill it every time,” Cordia said.