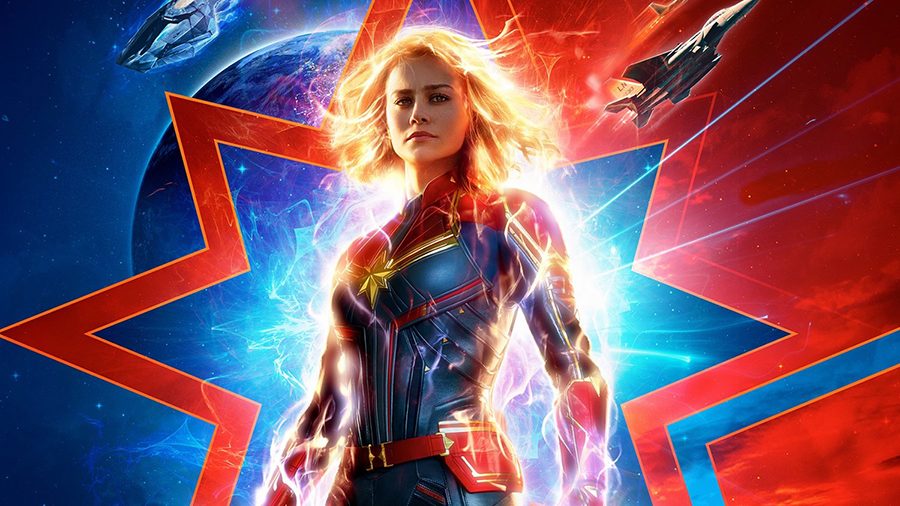 With the 21st Marvel Cinematic Universe (MCU) installment, Captain Marvel, Marvel Studios received the worst rating on a Marvel movie since The Incredible Hulk and Captain America: The First Avenger, yet still maintains an 80 percent on Rotten Tomatoes.

Captain Marvel takes MCU fans back to the 90’s where beloved Agent Phil Coulson (Clark Gregg) is a new guy and Nick Fury (Samuel L. Jackson) is a simple agent in the organization called S.H.I.E.L.D. The film follows Vers (Brie Larson) who is a member of the Kree race and is training to fight against the Skrulls. The Skrulls have been taking over planets throughout the universe and are setting their sights on Hala, the home of the Kree. Vers and the rest of her Kree team are sent out on a mission to obtain an kidnapped Kree when Vers gets captured. Using her power of a photon blast coming from her fists, Vers escapes to the closest planet: Earth. Vers presents S.H.I.E.L.D. with their first superhero since Captain America in the 1940’s and their first “alien”. The movie also holds a mysterious aspect due to Vers not remembering any aspect of her life before waking up on Hala.

The more negative rating stems from the film’s not-up-to-par acting with the rest of the MCU films and the cinematography mistakes. While Brie Larson and Jude Law’s acting wasn’t necessarily bad, viewers are used to every line coming across strong and impactful throughout the most recent Marvel movies. A few of the lines landed flat and sounded cliche, but the overall acting was much better than fans expected from the trailers. The only other major issue was 15 minutes of the movie was too dark. Audiences were forced to squint to be able to tell who was talking and who was doing what, but after the scene changed, the brightness returned to a normal standard.

As per usual for a Marvel film, Captain Marvel had its fair share of comedic moments mostly due to the rapport between Nick Fury and Vers along with moments of laughter stemming from Goose the cat. The special effects were up to the MCU standards as well with the photon blasts creating unique color schemes. The only critique in the visual department is the Kree helmets which look a little laughable, but is forgiven since that is what they look like in the comics. The film also provided hardcore Marvel fans some plot points and answers that have appeared through the MCU and made interesting ties to other MCU films.

Despite the bad reviews, Captain Marvel is a decent and enjoyable Marvel film for fans and newcomers alike with familiar faces and some teasers for the next MCU installment: Avengers: Endgame. As more audiences view the movie, the film’s rating continues to go up, so the producers must have done something right to strike enjoyment from fans.