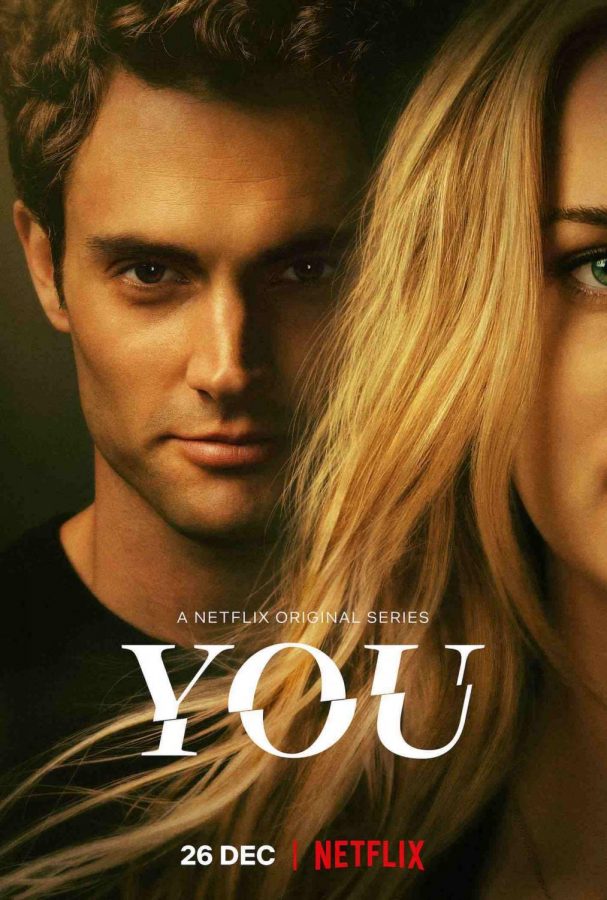 Netflix released the 10 episode series You Sept. 9, striking up controversy with many audiences.

The show follows Joe Goldberg (Penn Badgley) as he comes in contact with Guinevere Beck (Elizabeth Lail), “Beck”, and begins to stalk her. You focuses on the point of view of Joe and attempts to portray the reasons as to why stalkers do what they do. The show features disturbing aspects like murder, perversion, and obsession. Although, the tone does not remain dark all the time throughout the season. Producers made Joe “comedic” in his inner monologues and even incorporates a “normal” relationship with another character named Paco (Luca Padovan).

Many viewers came into the Netflix original believing the show would emphasize the dangerous and horrifying mindsets that stalkers have, and serve as a prominent warning for young women and men alike. You partially fulfilled that duty as some scenes did crank up the horror aspect of the situation. Towards the end of the 10 episodes, Beck finds Joe’s secret box that was filled with evidence of him being Beck’s stalker. The box contained objects like Beck’s underwear and old cell phone, but it also held objects not belonging to Beck like a glass jar of human teeth. Joe also murders people in Beck’s life that he deemed a threat throughout the show that effectively showcased the dangers of the situation.

Unfortunately, most of the Netflix original seemed to redeem Joe or present reasons as to why what Joe was doing was okay. The comedic moments from Joe’s stream of consciousness gave him a bizarre likeable factor to his personality that caused audiences to strangely defend his actions. A majority of the show also focused on the “good” things Joe did for Beck. The two people in Beck’s life that he killed were portrayed as quite toxic people for Beck which almost made their murders seem like a good thing. At some points throughout the show, it seemed that Joe was almost Beck’s protector rather than her stalker which completely defies the point of the show. Audience’s were also made to believe that Beck almost deserved Joe’s treatment of her because she cheated on him and made him feel as if he was going insane due to his suspicions of Beck’s infidelity. Joe’s relationship with Paco caused pause in painting Joe as the villain of the story as well. Paco lives with his mother and her very abusive boyfriend, and Joe is seen looking out for Paco and taking care of him when Paco’s mother couldn’t. This relationship made audience’s conflicted as to whether Joe was a “good” guy or “bad”.

While You had the potential to convey an important message to audience’s, it failed to deliver that message all the way. Although, the show was still entertaining as long as audience’s didn’t look too deep into what Netflix and producers were trying to say.