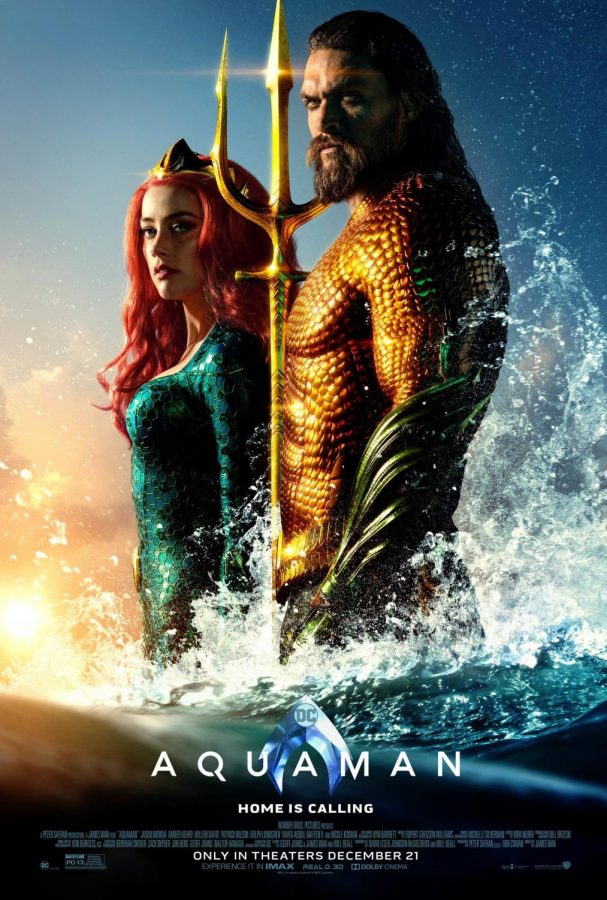 Warner Bros. and DC Films attempted at another superhero film after the flop of Justice League with Aquaman, released Dec. 21.

The recent slew of DC superhero movies have left fans more than disappointed and downright frustrated as Marvel Studios manages to produce the top of the line superhero films, yet DC Films and Warner Bros. have not found their groove. Man of Steel, Batman vs. Superman, Suicide Squad, and Justice League were all highly anticipated, but did not bring home great reviews or the money hoped for. Wonder Woman has been the most successful film DC has had, bringing in $821.8 million from the box office. The film was hyped on social media due to it being the first solo female superhero movie to hit the big screen. Surprising many, Aquaman has now grabbed the title of DC Films and Warner Bros. most successful film, surpassing Wonder Woman with currently hitting $1 billion from the box office.

Walking into the theater, most were expecting a cringy superhero movie with a horrible script, no chemistry, and maybe some cool effects seen in the trailers. Aquaman received most of its praise from the fact that DC Films and Warner Bros. have realized that their superhero movies are subpar and began to poke fun of the ridiculousness of the film. It would have been quite hard to make an Aquaman film without this self-aware tone as most viewers went into the film with low expectations, already scoffing at the elements of the movie. Taking that attitude of audiences, the producers and directors of the film made Aquaman full of laughs and enjoyable to watch. With the use of dramatic head turns and hair flips along with the score, turned what would have been eye-rolling scenes into humorous ones as the audience knew the filmmakers were doing this on purpose. Along with Aquaman’s half-brother and main villain Orm’s (Patrick Wilson) seriousness in wanting to become “Ocean Master”, made audiences giggling throughout the movie.

The self-aware aspect wasn’t the only humorous part of the film. Aquaman himself, otherwise known as Arthur Curry (Jason Momoa), had a laid back and funny vibe that overall made viewers smile at his one-liners and hilarious antics during the film. His relationship with Mera (Amber Heard) was comedic as well due to the constant bickering between the two. Filmmakers also capitalized on the differences between the underwater world and the above-water world for funny moments especially when Mera thought a rose was food and decided to eat it. Not wanting to make her feel bad, Aquaman shrugs and eats one too causing audiences to burst out with laughter.

The main critiques of the film come with the balance of comedy with seriousness and distribution of effects. Since the film was mostly funny, it made the serious moments feel out of place and like they didn’t belong although they were needed. The special effects underwater were breathtaking with many bright colors and amazingly done CGI, but above the water, the effects were lacking and looked like they were made low-budget. The last critique is the acting of teenage Aquaman (Kekoa Kekumano) was atrocious and hard to watch. Although only lasting a few minutes, the scene with teenage Aquaman was burned into the audience’s minds and not in a good way.

Expected to be another DC superhero movie flop, Aquaman surpassed expectations and became one of the best DC Film and Warner Bros. movie yet through it’s comedy and self-awareness.