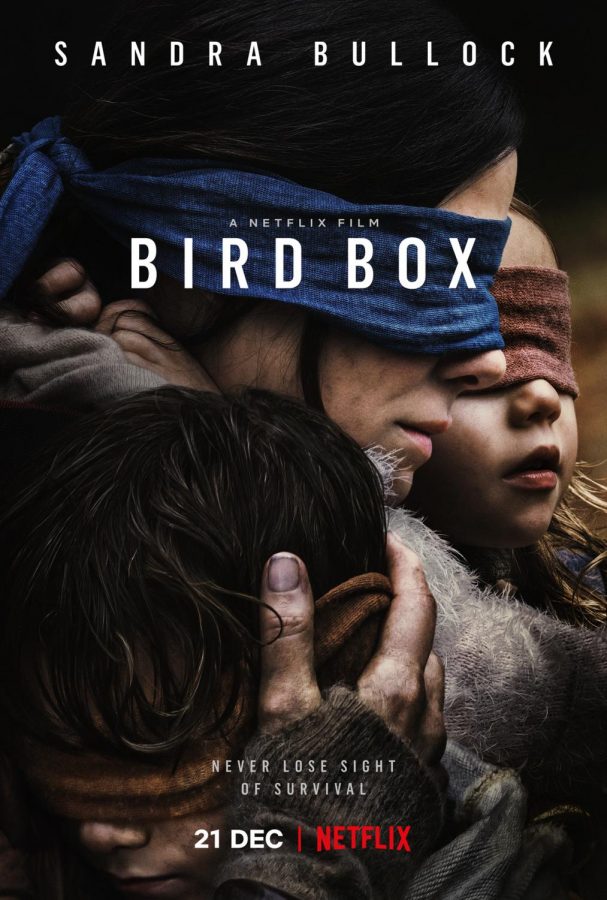 The thriller, based off the book of the same name, follows Malorie (Sandra Bullock) in a post-apocalyptic world where in order to survive, one must not open their eyes outside or even look outside. If you so happened to open your eyes, creatures who are never seen in the film would possess your mind and force you to commit suicide. The main plot of the film revolves around Malorie trying to reach a sanctuary with her two children who she named Boy (Julian Edwards) and Girl (Vivien Lyra Blair) by floating down a river in a small boat. What happened when the creatures first appeared is told through flashbacks.

The cinematography of the film isn’t necessarily noteworthy as no stylistic choices stick out. The one aspect of debate is the executive decision to never let the audience see the creatures besides the movement of the environment around them. Producers had, at first, demanded that a creature be shown to audiences, but after that scene was incorporated, they decided at had the opposite effect than intended. Based on the images of the creature shared on Instagram and Bullock’s description of the creature, it’s best that they did not include the creature scene as it probably would have been more comedic than frightening. The overall explanation of what the creatures do to people given by Charlie (Lil Rel Howery) also makes more sense without the creature scene as he argues that the creatures are a representation of your deepest fears and regrets, thus looking different to everyone.

Besides the current happenings of Malorie and her children, which make up less time in the movie than the flashbacks, the film is quite predictable leaving only the scenes on the river to cause audiences to sit on the edge of their seat. Who dies is evident since Malorie is alone with her children and none of the others seen throughout the movie are present. Unfortunately, since most of the movie is spent in the past, it leaves some audience members bored and wishing there was more time spent focusing on the present.

Although Sandra Bullock’s acting is impeccable as her usual roles, viewers cared more about the fate of the birds with Malorie used to detect the creatures than any of the human characters. A debate of sacrifice that stuck with the audience was brought up when Malorie had to make the decision between which child should take off their blindfold and look to help Malorie steer through the rapids, striking the audiences in the heart with the unthinkable decision.

Bird Box, while having its issues does present an interesting concept to viewers, and is worth the watch to many.