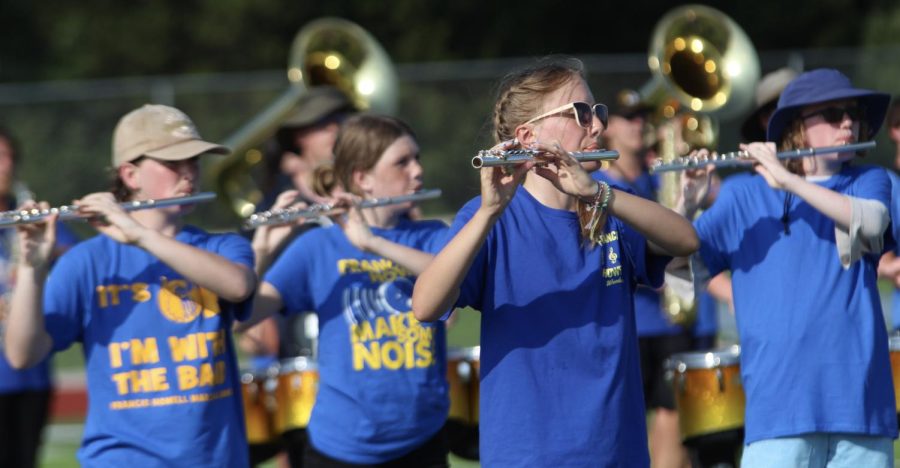 Guiding the other flutes, section leader Julia Niedzwiedzka stays in step with the rest of the band for the audience of parents and guardians on the Howell football field for the marching band parent preview. This Aug. 5 performance noted the end of band camp. “I like being able to help students achieve their full potential and improve throughout the season as well as being able to organize section events that help bring people together,” Niedzwiedzka said.

Saturday, Aug. 27, Marching Band’s drumline competed in the Timberland Marching Percussion Competition. They competed in the Green Division and placed 4th out of eight schools. Drumline also received an award for Outstanding Quadline.

“I thought that my personal performance was okay, and I wasn’t expecting to win,” junior Ben Estes said. “When they called our school at awards I was in shock but very happy.”

Junior Kush Maheshwari won Outstanding Snare Solo for his solo on snare drum, which he wrote himself.

“To write the solo I would spend some time thinking of ideas, record myself playing, and then I would try to memorize it if it sounded good,” Maheshwari said.

In 2017, Howell student Matthew Hinkle entered the Solo contest on snare drum. Hinkle was the last to do so before  Maheshwari. Hinkle now serves as a technician for the drumline.

Marching Band competes next in the Lafayette Contest of Champions, Sept. 24.