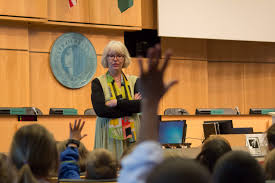 Sally sells seashells by the seashore — every kid’s worst nightmare in speech class. Slurred s’, Rs pronounced as Ws, and lisps are all common speech problems.

“I went to speech classes from preschool to second grade, then again in seventh grade and sophomore year,” senior Sam Figgins said. “Most of the time I was there we were working on my stuttering issues and my confidence in speaking.”

Kids in speech help classes at an early age work on things such as language confidence along with common speech impediments. Though most don’t stay within the programs for a long time, the results can be noticeable.

“I don’t really stutter anymore unless I’m arguing. And I’ve gotten a lot more confident in the way I speak and interact since sophomore year,” Figgins said.

The regular curriculum doesn’t cover speech impediment problems that students face. If the problem is bad enough, students are referred to an in-house specialist.

“My largest group would probably be three,” Speech teacher Kelli Connors said, “I see around 50 students, roughly, and there may be three of those who actually work on speech really.”

Receiving speech therapy requires an assessment process, which determines if the speech problems are having an impact on learning Only then can students begin taking the classes.

“Most students that I see in the hallways are pretty adept at communicating,” Connors said. “Every once in awhile I’ll see a student that I think, okay, maybe some of those services would be helpful. But it has to be so much that if without those services, you would have a negative impact on your education.”

Speech class at the high school level focuses on people who have a lot of   trouble communicating as a whole, rather than those who have common speech defects.

“You have to go through testing and there has to be an educational impact,” Connors said. “There’s a process to go through.”